Tomorrow, March 3rd, we celebrate the Foundation of the Oratory of the Good Shepherd and commemorate our three founding fathers: John How, Eric Milner White and Edward Wynn.

All three were engaged in their college communities and in the life of the University of Cambridge, and sought to devote their lives and energies, both individually and corporately, to the service of Jesus Christ in his catholic Church. They had settled on a rule of life that included daily Mass and prayers, meditation for a set time, and a fixed time for retiring. Father J.N. Figgis of Mirfield acted as their unofficial advisor.

Our Foundation Day celebrates the day that the founders made their Declaration of Intention in the Chapel of Sidney Sussex College. In December of that year they went to the farm at Little Gidding for ten days of common life, where the rudiments of the constitution were drawn up.

World War I intervened, and it was in September 1919 at Guildford that the first General Chapter was held. Here, the Manual was compiled, including the Seven Notes and the Rule. The first professions were made in St Edward’s Church, Cambridge, on October 25th 1919.

A biography of the Founding Fathers
taken from the Oratory Necrology 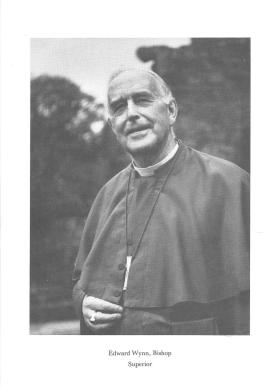 Edward Wynn | A member of the Oratory said of Edward Wynn after his funeral that the hymn Firmly I believe and truly “has been as fully believed and lived by him as anyone I shall ever know.” He received his BA in 1909 at Trinity Hall, Cambridge and studied at Ely Theological College. He was made deacon in 1912 and ordained priest in 1913 as Chaplain of Jesus College. In 1913 he was one of the three founders who made their Declaration of Intention. World War I saw him as a Chaplain to the Forces, and then briefly as Vice-Principal of Westcott House.

In 1921 Edward Wynn became Dean, and later Senior Tutor, of Pembroke College, where he ministered until 1941 when he was appointed Bishop of Ely. He was Superior of the Oratory from 1938 until his move to Ely, and was a leader in setting up the Oratory College in the United States and in promoting communication between members world-wide.

Edward Wynn worked with John How and Eric Milner-White in founding the Oratory and in 1937 he reiterated the case for the original conception of the Oratory as he saw it: “The raison d’être seems to be to give priests and laymen doing their own individual work, the  advantage and help of a rule and a close fellowship.” He drew distinctionsbetween the nature of the Oratory, and the general understandings of a  “religious community”. He was the one founder who remained a member of the Oratory until his life’s end.

He remarked in his enthronement sermon in Ely Cathedral that he had neverdone a day’s parish work in his life. His ministry lay elsewhere, in the nurturing of souls at Cambridge and in his pastoral work as bishop. Edward Wynn left an enduring and valued legacy in both spheres. After his passing, comment was made of his spirit of happiness, deep sincerity, deep devotion and visible Christlikeness.

John How |John was one of the three founders of OGS and our first leader, with seniority, experience, vigour, austerity and glorious humour.

He studied oriental languages and theology at St John’s College, Cambridge before studying in 1904 at Ely Theological College. John was made deacon in 1905, ordained priest in 1906 for Southwark, and began his ministry at the Wellington College Mission, Walworth. In 1906 he returned to Cambridge to lecture in Hebrew at St John’s until 1920, with a break at Trinity College. He was appointed a services Chaplain in World War I, but health problems prevented his going overseas until 1917.

He was part of the tide of young Anglo-Catholic priests eager to strengthen the Catholic movement in the Church of England, and was among those who made their Declaration of Intention in the Oratory in 1913. John was accounted as Superior from then until his resignation in 1924. With Eric Milner-White he formulated discussions held before and during the war into the Seven Notes, and was among those who made their first profession on 25 October 1919, having been bound by simple and informal declarations of intention up to that time.

As Warden of the Oratory House in Cambridge from 1920, he started the Oratory Club, which became the Companions of St John. He loved sports and was more involved than other members in the outside world and pastoral ministry in the town.

In 1924 John resigned from the Oratory to be diocesan missioner in the Diocese of Manchester, the better to pursue his pastoral and missionary vocation, and in order to marry. He became Vicar of St Nicholas’s, Liverpool and Rural Dean, and then Vicar of Brighton and Rural Dean. In 1938 he was elected Bishop of Glasgow and Galloway, and in 1946 Primus of the Scottish Episcopal Church, a position he held until his retirement in 1952. 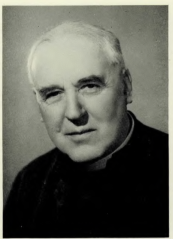 Eric Milner White | As the new Dean of King’s College Cambridge in 1918, Eric responded to the spiritual devastation wrought in Britain by World War I. From a concept used in 1880 by Bishop Benson of Truro, he developed the service of Nine Lessons and Carols, which was first offered inKing’s Chapel on Christmas Eve 1918. It stands as a lasting tribute to his talents with music, prayer and scripture, and to his heart as a pastor.

Eric went up to King’s College Cambridge to read history, and graduated in 1907. After training at Cuddesdon, he was made deacon in 1908 and ordained priest in 1909 for Southwark. He served curacies before returning toKing’s as chaplain in 1912 and as a lecturer in history. He was an army chaplain during the war, and early in 1918 resigned his commission tobecome Dean and Fellow of King’s.

In 1913, Eric was one of the three founders of the Oratory, becoming Superior in 1924, and remaining in that position until 1938. In 1936 the Oratory began to address the question as to what it really was. In 1938 the General Chapter defined the word “profession” as not having the implications that it has when used in the traditional sense of taking vows in a religious order, but that it means self-commitment before God and within the fellowship of the Oratory to the way of life described in the Rule. Eric could not accept that this represented the meaning of the professions which he had made in the Oratory, and in 1939 he resigned, which was confirmed in 1940. He continued to live the rest of his life by the Oratory rule, and his Oratory friendships were never broken.

In 1941 Eric left King’s to become Dean of York. He had both an aesthetic and a practical interest in the great stained glass of Britain, and was responsible for a wealth of orders of service and occasional prayers. Archbishop Davidson expressed a belief that Eric was responsible for more ordinations than anyone else in the Church of England.

“The aim of the Oratory is the adoration of God in the service of the Lord Jesus Christ, and the imitation of his most holy life. Its fellowship and discipline are intended to encourage and direct its members in achieving this aim. Their membership will remind them that they can carry out their vocation of worship and service only in communion with the Good Shepherd and in the power of the Holy Spirit. They will seek in the Oratory these blessings for themselves and will order their lives for the strengthening of their brethren in accordance with the Notes.”

You will find our contact information by clicking here.

The Oratory world-wide also has its own website which can be found at ogs.net